HomeTechKeyboard At Its Best: what You Would Like to Opt for
Tech
David Carry2 years agoApril 29, 2020No tags 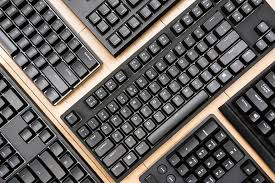 Obviously it also depends a lot on the quality of the membrane keyboards. In addition, over time the keyboard membrane may weaken, becoming less compact and causing typing problems.

Now that you know the essential differences between the various models, let’s analyze what are the main characteristics of the keyboards. Also we will briefly explain some terms that you could find by consulting the technical specifications.

Ghosting is a phenomenon that occurs mainly on cheap keyboards. It occurs when two keys are pressed simultaneously, but three inputs arrive instead of two (therefore an unwanted ghost input). Make a visit to the sites and look for the best keyboard there.

Imagine playing a video game and suddenly you have to press a combination of two buttons. Instead of receiving two signals, the PC receives 3 signals causing an unwanted third action that can cause problems during gaming.

In other cases it occurs if, for example, several keys are clicked simultaneously and the keyboard circuit, due to a physical limitation, cannot carry out all the pressed commands.

Often in the technical specifications of the keyboards you can find the number of clickable keys at the same time. 2KRO (Roll-Over) means that the keyboard can manage two keys at a time, 3KRO if it can manage 3 keys pressed simultaneously, 6KRO for 6 keys and finally NKRO for a higher number of keys.

Here is a test in which the 6KRO mode is activated first and then the NKRO mode. Key bouncing is the time required to click a button again. For example, if you have to press the same button twice, before you can press it a second time you have to pay attention to the time necessary to raise the button and click it again.

Another parameter that is often reported in the technical specifications is the number of grams necessary to activate the button. For example, some mechanical keyboards indicate 50 grams for pressing a certain button. This also determines the tactile feedback guaranteed by the keys.

A very useful function especially for gamers is the ability to program the keys . In some gaming models it is possible to associate particular functions or programs with some specific keys, in order to speed up the execution of an operation as much as possible. So the programmable buttons are really useful. RGB backlighting is definitely a feature that is in great demand by gamers. Modern keyboards can illuminate all keys with different shades of colors.